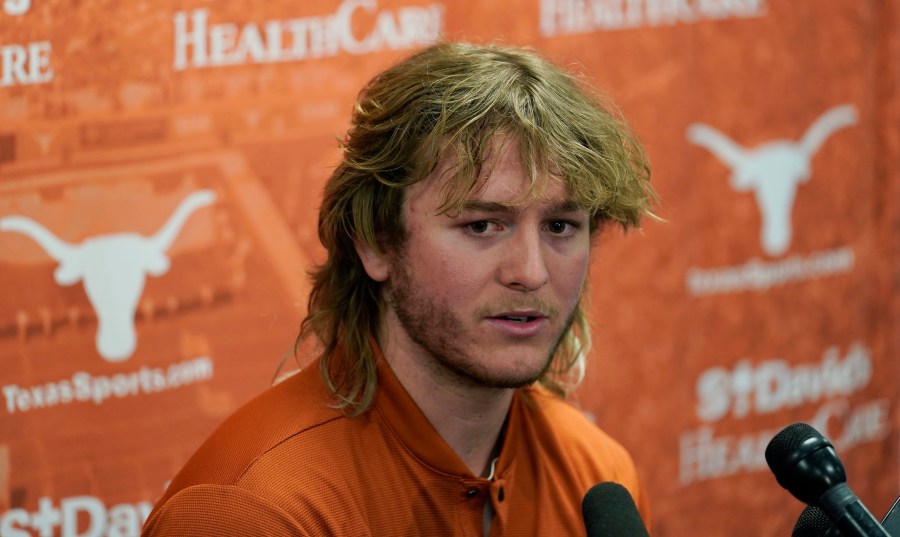 Sarkisian chose not to do a full spring game, citing offensive line depth, but his version of Texas’ final spring practice may stick around. Texas went through a set amount of plays, around 100, before a red zone competition closed out the event in under two hours.

What Texas coach Steve Sarkisian said after the spring game

Most Texas fans will focus on the quarterback competition between Hudson Card and Quinn Ewers. When asked about his quarterbacks performances, Sarkisian played it down the middle, saying both players had a good and bad moments.

Texas running backs Keilan Robinson and Roschon Johnson showed that this backfield is more than Bijan Robinson. Johnson broke through the line for a 55-yard touchdown.

Card seamed a perfect pass to tight end Jatavion Sanders at the end of the first half. Sanders rumbled toward the goal line, carrying three defenders with him. Jerrin Thompson made a play, striping the ball away. Impressive effort from both players.

Sarkisian ended the spring game with a red zone competition. Offense playing against the defense with the first to 18 points declared the winner.

On the first drive, Ewers couldn’t convert a first down, so the offense settled for a Bert Auburn field goal. Defense took a 4-3 lead on the first possession.

Second possession, Card connects with Marcus Washington for a first down. The series stalls out at the 2-yard line on an incomplete pass on the fourth down. Seven points for the defense and a 11-3 lead.

Third possession, two plays and a touchdown for Ewers. Xavier Worthy beats his man inside for a 21-yard touchdown. Defense still leads 11-10.

The final possession was derailed by an intentional grounding penalty. Jett Bush put pressure on Card on first down, setting the offense back to the 40-yard line. A 45-yard field goal was no good, leading the defense to an 18-10 win.