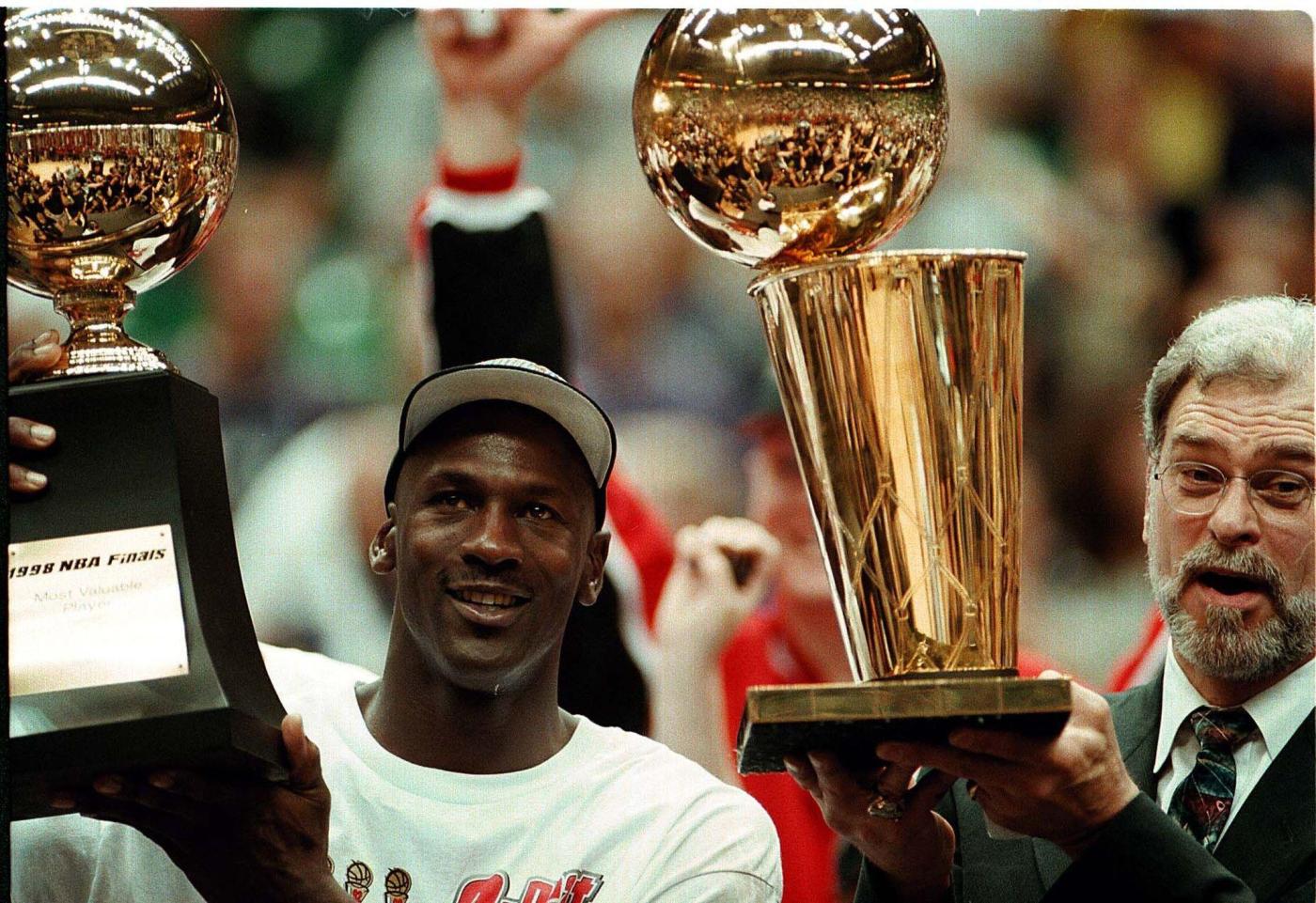 It was the inaugural season of an expansion team that surprised everyone by making the Western Conference playoffs before getting swept in three games by point guard Lenny Wilkens and the Hawks.

“For the new Chicago Bulls, the season is over,” wrote Tribune beat writer Bob Logan after the final game. “They will surely be heard of again, however, on the Chicago sports scene.”

That was how it all started for the Bulls, a brand that became internationally known by the early 1990s.

Pro basketball was a tough sell in Chicago 55 years ago. The Bulls once drew the ire of the NBA by announcing a crowd of 594, and owner Dick Klein was ordered never to release figures like that again. John “Red” Kerr, the first Bulls coach and later a popular TV analyst, always brought a pocketful of dimes to games in the early days so he could call the newspapers afterward.

“I’d dial up the papers’ sports desks and say something like: ‘Hi, this is John Kerr, coach of the Bulls,'” he recalled in ’91. “The Bulls won tonight 110-106, and Bob Boozer was our leading scorer with 26 points.” The desk guy would say: ‘Boozer? How ya spell that? ‘ I’d say: ‘BOOZER,’ and then the operator would jump in and say, ‘Please deposit another dime.’ “

When fans would call up the old Chicago Stadium and ask what time that night’s game was, Kerr would reply: “What time can you be there?”

As playoff basketball returned to the United Center on Friday night with Game 3 of the Bulls’ first-round series against the Milwaukee Bucks, it’s hard for many to imagine a time when the team struggled for attention, even going so far as to stage halftime shows in which fans could take to the mat against Victor the wrestling bear.

After having to play in an empty stadium for almost all the home games last season because of the COVID-19 pandemic, the Bulls led the league in average attendance in 2021-22 at 20,881 per game, moving back into the top spot for the first time since 2017-18.

The Bulls are now an iconic sports franchise like the New York Yankees or Green Bay Packers thanks to the six NBA titles they won from 1991-98, when Michael Jordan, the greatest player of all time, dominated the court and Hall of Fame coach. Phil Jackson pulled the strings.

The Bulls haven’t returned to the NBA Finals since the “Last Dance” season in ’98 and barely competed the last four years. But executive vice president of basketball operations Artūras Karnišovas junked the former regime’s rebuild last summer and brought in DeMar DeRozan, Lonzo Ball and Alex Caruso, who teamed up with Zach LaVine and Nikola Vučević to change the direction of the franchise.

It didn’t look that way Friday night in a 111-81 loss to the Bucks before a shellshocked sellout crowd of 22,667 that booed from the third quarter on. The Bulls desperately need a wake-up call Sunday afternoon in Game 4 to avoid falling behind 3-1 and facing elimination Wednesday in Milwaukee.

DeRozan said “a loss is a loss,” even one as abysmal as Game 3.

“Whether we lost by 30 or by one point, we’ve got to come back and compete and protect our home floor,” he said.

No matter how this series turns out, it’s safe to say the future of the Bulls is much brighter than it was one year ago. Re-signing LaVine will obviously be job no. 1 for Karnišovas, but the Bulls have reestablished themselves as an Eastern Conference contender. With a healthy Ball returning next season, the maturation of Patrick Williams and some offseason tinkering, expectations will be even greater for coach Billy Donovan’s team in 2022-23.

And that’s good news for the NBA, which always seems better when big-market teams such as the Bulls, Boston Celtics and Los Angeles Lakers are in the mix.

The dynasty era may have fully transformed Chicago into a Bulls town, but the team still had a core following before the arrival of Air Jordan in 1984. Brian McIntyre, the former NBA director of media relations who began in the same capacity for the Bulls in The late 1970s, remembered when Chicago Stadium was less than half full after the era of teams led by Chet Walker, Bob Love, Jerry Sloan and Norm Van Lier came to an end.

But in 1981, a scrappy Bulls team led by Reggie Theus and Artis Gilmore upset the New York Knicks in the first game of a best-of-three series at Madison Square Garden, then came home to a raucous Stadium filled to the brim with 19,901 fans. Trailing by 15 in the third quarter, the Bulls rallied to take it to overtime and eventually won 115-114.

“I swear that was the loudest I’d ever heard at Chicago Stadium,” McIntyre said. “It was a late start for CBS, and everyone in the upper deck was plastered.”

The Bulls’ reward in the Eastern Conference semis was the Celtics. Larry Bird was so confident that he and his teammates were drinking into the wee hours at Butch McGuire’s on Division Street. A bartender asked Bird if he was worried about drinking so late the night before a game.

“We can beat the Bulls drunk or sober,” Bird says, “McIntyre said.

Bird was right. The Celtics swept the series in four games on their way to the ’81 title.

The Bulls regressed again until selecting Jordan with the No. 3 pick in the ’84 draft. There were good moments – Jordan hitting “The Shot” over Cleveland’s Craig Ehlo to clinch a first-round series in 1989 – and down moments, such as being swept by the Celtics in ’86 and ’87.

After tough back-to-back playoff losses to the Detroit Pistons’ more physical “Bad Boys” in 1989 and ’90, the Bulls beat Magic Johnson and the Lakers for their first title in ’91, setting the dynasty in motion. Jordan always stepped up his game in the postseason, but Scottie Pippen, Dennis Rodman, John Paxson, Toni Kukoč and Steve Kerr all had playoff moments that would live forever in the Bulls lore.

The last time I covered the Bulls in the playoffs was in 1993, the third title of the first 3-peat. During an off day of the NBA Finals between the Bulls and Phoenix Suns, Jordan was asked if he thought the fan base would dwindle once he retired.

“That’s something (the organization) will have to pay attention to from a business aspect,” he replied. “I don’t know how long the fans are going to be as supportive. Or will they be as supportive? I hope that they will, because I certainly will be a fan of Chicago when I’m gone, and I’d love for the fans to maintain that support even when I’m gone because of what we’ve built here.

Little did we know Jordan would retire the following October on the eve of the 1993-94 season. But fans continued to flock to the West Side after Jordan’s departure and when he returned at the end of the 1994-95 season following his baseball sabbatical.

The real test came after the breakup of the dynasty following the Bulls’ sixth title in 1998.

In the first year of general manager Jerry Krause’s rebuild, the Bulls still finished first in average attendance despite a 13-37 record in a lockout-shortened season. But the losing wore on fans, and the Bulls sunk to ninth in attendance by 2001-02, when Tim Floyd – Krause’s hand-picked replacement for Jackson – was finally fired midseason.

Derrick Rose’s knee injury in the first-round series against the Philadelphia 76ers in 2012 ended what might’ve been a championship season, and neither Rose nor the Bulls recovered in the ensuring years. The post-Jordan drought continued.

But a decade after Rose’s franchise-altering injury, DeRozan, LaVine, Vučević and Caruso are hoping to pull off a first-round upset of the defending champion Bucks, making the United Center into a madhouse again.

If they repeat their Game 3 performance, it’s likely to be the final home game until next season. DeRozan promised a more aggressive effort in Game 4.

“We’ve got an opportunity to tie this thing up on Sunday at our home court,” he said. “And that’s what we’re going to do.”