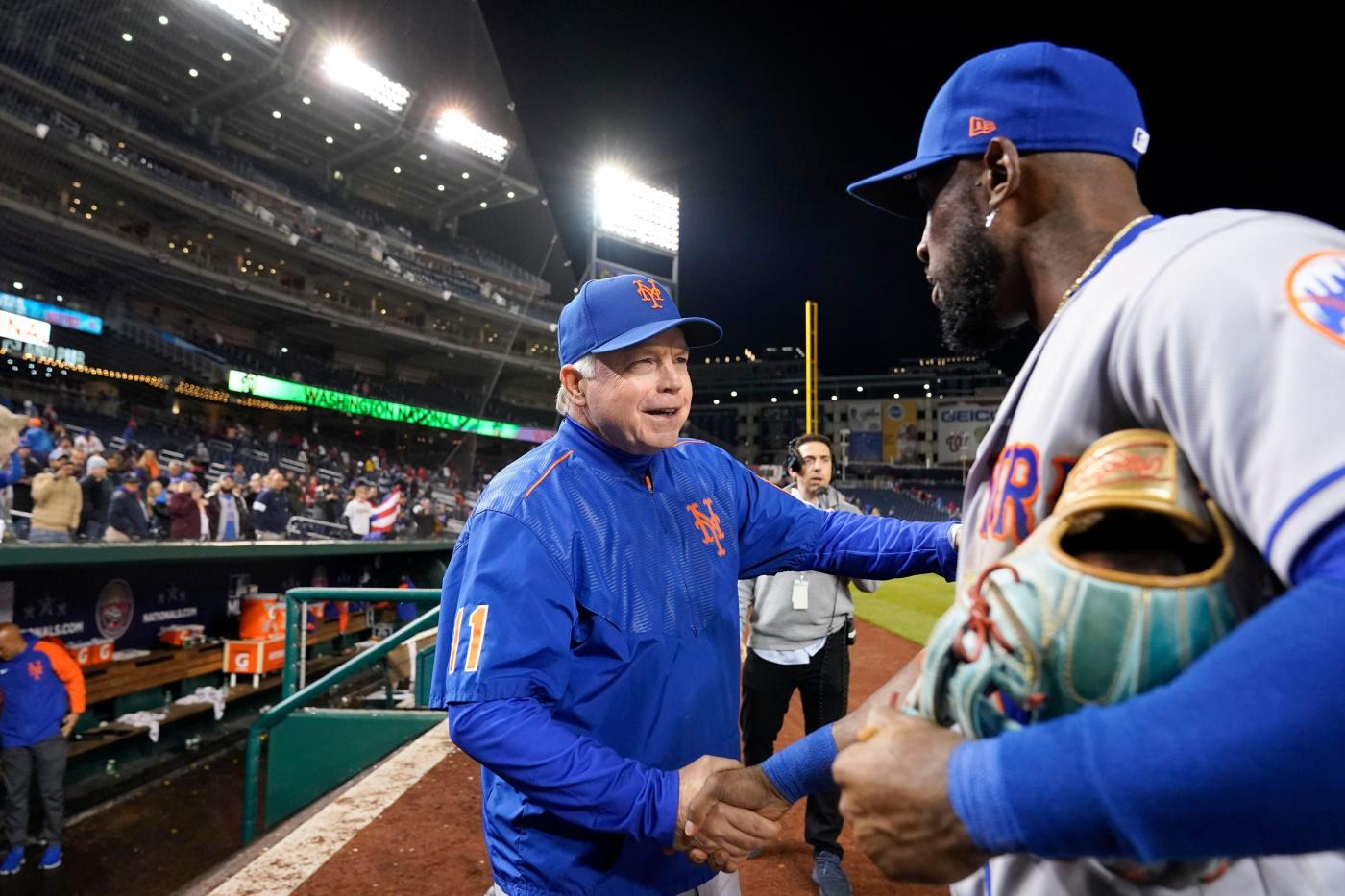 You know who and what the Mets are right now? The Mets are fun again, is what they are, for the first time in a long time, and that includes all the time they spent in first place last season. The Mets are fun when the Yankees aren’t, at a time when the Yankees are currently a No-Fun Zone, and not just because they can’t hit. The Mets are winning games, just took three out of four from a Giants team that won 107 games last season, are doing it without Jacob deGrom, who might not be back until around the All-Star Game, but who used to be the best pitcher in the world.

But Max Scherzer’s starts have become appointment viewing already, and fill the deGrom void nicely. And Francisco Lindor, whose first year in the big city was such a huge disappointment, is playing like what he was supposed to be when the Mets got him from Cleveland, and that means the best all-around player in town, and someone with a chance to be the best and most exciting all-around position player the Mets have ever had.

It is not just one thing with them in the first weeks of the season, with so much season left to play. It is that the new owner, Steve Cohen, was ready to spend whatever it took to get Scherzer. It is the fine work of general manager Billy Eppler, who has brought in professional players like Mark Canha and Eduardo Escobar and Starling Marte along with Scherzer. The Mets went through a lot of candidates and a lot of back page heartbreak when they couldn’t get anybody to come run their baseball team.

In the end, it was all worth it. Look around baseball now and then look at what Scherzer and Canha and Escobar and Marte are doing with Boss Cohen’s Mets, and you tell me what executive out there had a better offseason than Eppler did off the early results. At a time when Yankee fans wish their team had done more in the offseason, and that means a lot more, Eppler has come up a star, at least so far.

But the most important acquisition the Mets made wasn’t Scherzer, or Canha or Escobar or Marte. It was a great manager named Buck Showalter, who is already reminding everybody, before we get out of April, just how much baseball he has in him. You wish now that the Mets had brought him back to New York as soon as he left the Orioles. No matter. What matters is that he is back now. And where are all the people who wondered, during the process of Showalter being hired, if he was too old at 65, if he was going to have trouble relating to younger players.

You know what the best thing he has done already with the ’22 Mets? That. He has clearly connected with these players.

And you need to know that he is having a blast. After the Mets won a honey of a 2-0 game on the road against the Phillies the week before last, I joked to Buck that his team had the Phillies all the way.

And by the way? Just because the Mets have had this kind of start doesn’t mean they are going to win the division or the pennant or get Buck to his first World Series. We’ve seen the Mets have crazy good starts before, one of them under Mickey Callaway. We did see how long they were in first place last year, even though they seemed to be hanging on by their fingernails every night, and finally collapsed the way they did at the end.

Mets fans, ever since the World Series of 2015 – they are the last New York team to actually make it to the Series – have been conditioned to things going wrong. Yoenis Cespedes flamed out. That was just the start of it. And just when Mets fans did get their hopes up last season, when they were right there in the National League East, deGrom got hurt. Is still hurt. No one is sure when he will be himself again, or if he will be himself again, even after the way he showed such early promise in the spring.

But you see what is happening? Starting pitch has been the rock-solid foundation of the fun the Mets have given us over the first few weeks of the season. Tylor Megill got the ball on the Opening Night against the Nationals and was as good as he’s ever been in the big leagues. Carlos Carrasco is in the process of reminding people the way he could pitch in Cleveland when he was healthy.

And Mad Max, even at the age of 37, is a show. Going right after hitters. Getting the ball back from the catcher and ready to throw it again. We should have known, sitting at Roger Dean Stadium in Jupiter for his first spring start against the Marlins, how this was going to go when he went five innings in that first outing.

Every time he would come back out of the dugout, the spring cheers from the Mets fans in the place would get bigger and bigger. Now those cheers have carried all the way to Citi Field, where he heard it big the other night when he started throwing hitless innings against the Giants.

He has been a total star. So has Lindor. Scherzer is a show every five days. Lindor, the switch-hitting shortstop who is still just 28, has been a show just about every day, hitting home runs from both sides of the plate one day, and getting a walk-off knock in the first game of that doubleheader against the Giants, and running the bases and making dazzling plays in the field. He’s that good. It just took him some time to show Mets fans just how good he really is.

But you have to keep coming back to the manager, who’s having as much fun as anybody. Who led the charge out of the dugout in Washington, first week of the season, when he got tired of watching his players get hit by pitches. We talk all the time about culture changers in sports. Sometimes it is just that, talk. And sometimes it doesn’t last, the way it only seemed to last one season with Tom Thibodeau’s Knicks. But you can see how different things are with the Mets this season, how things really did seem to change as soon as he showed up in Port St. Lucie.

“Buck reminds me of [Terry Francona]Lindor said to me one spring training afternoon, referencing his old manager in Cleveland. He’s the perfect combination of old-school baseball, but someone who’s embraced all the numbers of the modern game. … And if there is one message that Buck has given to me, it is to just play ball. “

Mets are playing some ball. Fun to watch. Hope it lasts. Lucky for the Mets Buck stopped here.

THESE NETS HARD TO ROOT FOR, HARD TO SPIN THIS COLE START & IS JONES BETTER THAN BAKER?

Other than Aaron Judge, free-agent-to-be, who do you really want to watch with the New York Yankees?

I was worried the other night watching Kyrie in Game 2 that he’d forgotten to properly use all of his fingers when it came to basketball.

You know what I wish about him and the Nets, and that includes KD?

I wish they were easier to root for, now more than ever.

They are New York.

They did carry championship ambitions into the playoffs, same as they did last year, before James Harden started to look as if he’d lost a bet coming to Brooklyn.

But in the end, and as much as Kyrie seems to think the whole thing is about him, it’s not.

The headliner here is Kevin Durant, trying to show that he can win a title when he doesn’t have Steph on his team.

Here’s kind of an interesting question:

What kind of offense did the Powers That Be at Yankee Stadium think they were going to have this season?

And it is fair to wonder, at this point in Gerrit Cole’s Yankee career, if anybody did a deep dive on that spin rate of his before he arrived on 161st St.

If Rafa Nadal isn’t healthy, the best thing for men’s tennis would be if the Spanish kid, Carlos Alcaraz Garfia, wins the French Open as a teenager the way Rafa once did.

Gonna ask this again: Are you absolutely convinced that Daniel Jones is a better quarterback for the Giants than Baker Mayfield might be?

Gonna say this again: Nobody is a better big-game, big-moment sports broadcaster than Mike Breen.

If you’re keeping score at home, Jordan Poole was the 28th pick in the 2019 NBA draft.

Gary and Keith and Ron continue to be, even on baseball broadcasts, a main plaza of the city.

Somebody needs to explain to Yankee fans all over again how giddy they’re supposed to be because the defense improved from last season to this.

Golf is more fun when Jordan Spieth is winning.

How can anybody beat the Dodgers if they pitch?

Just a couple of weeks to “Bosch: Legacy.”

Finally today: A Happy Birthday to our middle son, Alex.

He’s the producer in the family, and already a star at doing that.

But then he’s been a star, at almost everything, across a pretty wonderful life.

You may have read this before the subject of A. Lupica:

We continue to do what we’ve done since he was a little boy.

Stay out of his way, and just watch him go.