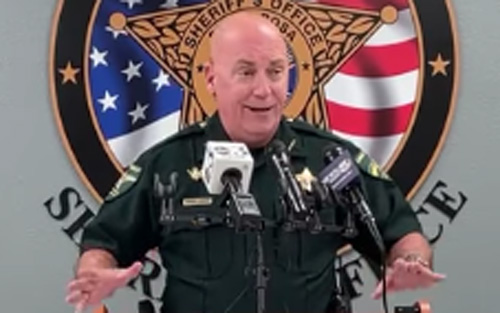 PACE, Fla. (AP) – A Florida sheriff expressed disappointment after a homeowner shot at an intruder – because “he didn’t get hit, and now we have to pay for him.”

Bob Johnson, sheriff of Santa Rosa County, publicly invited the homeowner to attend classes to “learn to shoot a lot better. [and] save the taxpayers money. “

Johnson made the comments during a news conference Thursday regarding the arrest of a 32-year-old man suspected of breaking into houses in Pace, near Pensacola on Florida’s Panhandle.

Multiple residents called 911 Wednesday to report the break-ins, and deputies set up a perimeter, Johnson said. The man was jumping over fences and entering homes.

Before he was caught, somebody shot at him. Deputies were unable to determine who opened fire.

“I guess they think they did something wrong, which they didn’t,” Johnson said. “If someone is breaking into your house, you’re more than welcome to shoot at them in Santa Rosa County. We’d prefer that you do, actually. “

He added that the sheriff’s office conducts a gun safety course every other Saturday.

“If you take that you’ll shoot a lot better and hopefully you’ll save the taxpayers money,” he added.

The suspect in the burglaries was injured when he broke through a window in an attempt to elude the deputies.

He has a record stretching back to when he was 13, Johnson said. He had spent more than six years in prison and had active felony warrants for his arrest at the time of his capture.