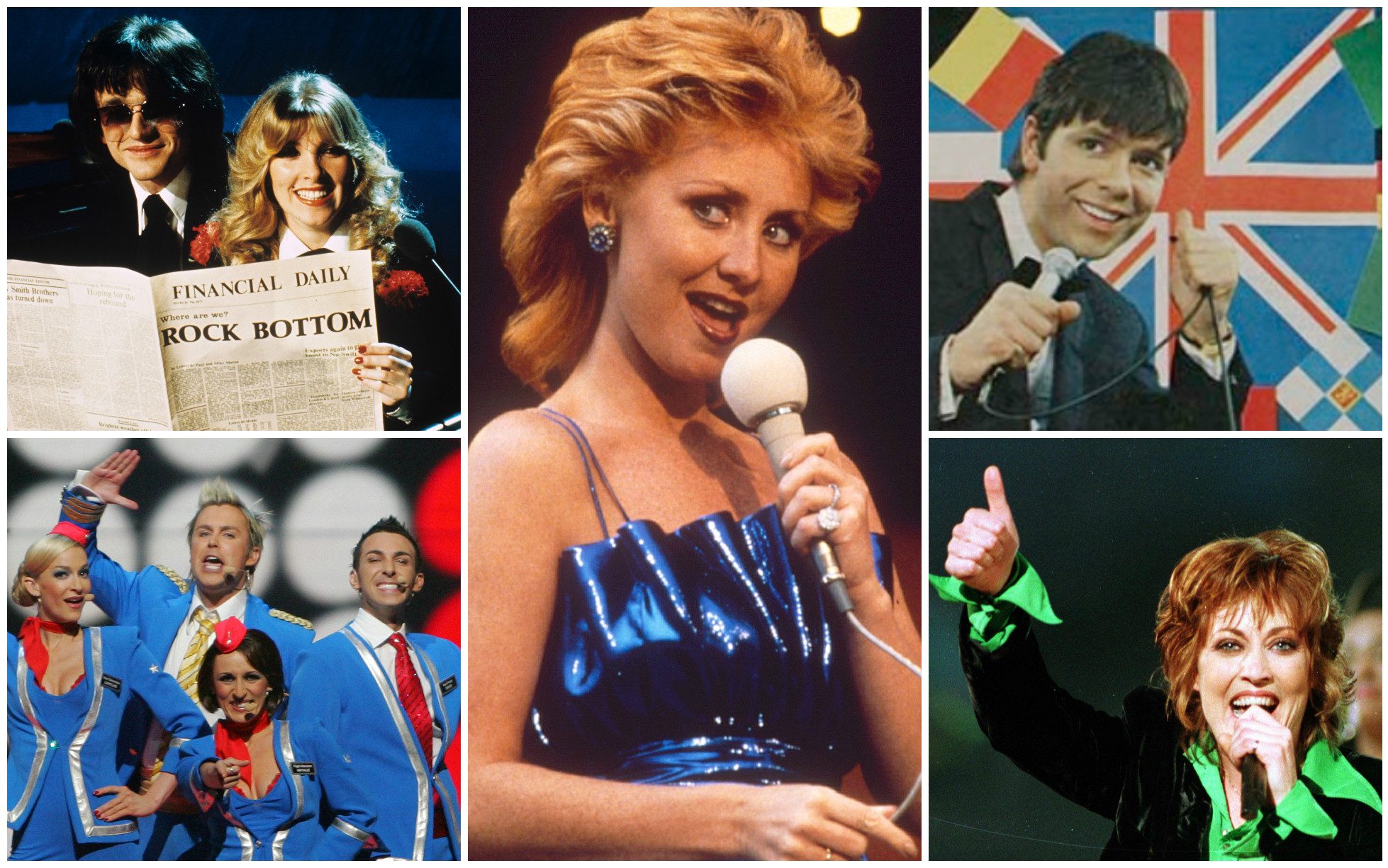 Our second winner was better, but not much better, sounding like the score to a Bavarian children’s cartoon. After her excellent work on ‘Shout’ and the title tune to 1967 film To Sir, with Love, Lulu let herself down here. This is the way the Sixties end, not with a bang-a-bang but a whimper.

Another weepy ballad, sung by a bald man barely clinging on to his ponytail. Despite the lacklustre performance and questionable fashion choices (shoestring tie, leather tuxedo jacket, beige trousers), the judges still found something to admire here: it came in second place, with the most perfect 12 scores of the evening.

“Siri, sing me a Celine Dion B-side.” Welsh model Jones tried in vain to inject any energy, humanity or warmth into this sluggish anthem-by-numbers. Its lyrics were roundly mocked on social media due to its unfortunate timing; This was our first Eurovision entry since the Brexit referendum, when Britain told Europe that we were, in fact, quite happy to give up on you.

Inhale deeply. Breathe in that cheese. Like a fine Camembert, this slice of overblown schmaltz has only ripened over time, and now has a perverse kitsch appeal. Written by Bruce Forsyth’s daughter Julie, it came unbelievably within a whisker of winning, reaching an undeserved second-place. As his Gatsby-writing namesake once put it, “Nothing is as obnoxious as other people’s luck”.

As John Travolta would later sing, “Why, Sandy, why-yi-yi?” Before she found big-screen fame in Grease, the fabulous Olivia Newton John gritted her teeth through this choppy marching tune. Snapping out the words “HAP-PY PEO-PLE”, she sounded like she was planning to bite open their jugulars. The song is ostensibly about the Salvation Army, and that military rhythm gives it a strangely oppressive feel. It’s like something they might play over a tannoy at Disneyland North Korea.

Is it a bird? Is it a plane? No, it’s a husband-and-wife double act. Carr and Johnson gawp inanely as the little birdie flies past their gaze (brought to life by the orchestra’s piccolo). “Sing, little birdie up above / Sing a song of love!” Those with the highest tolerance for twee might enjoy it; for everyone else, it makes a strong case for the benefits of bird flu.

This starts off with such promise. With his dark good looks and strong, even tenor, Belfast-born Carroll seduces us through the opening bars – before launching into a chorus so irritating it has been proven to give listeners mumps. Ring-ding-a-do? Ring-ding-a-don’t.

Back to make amends for 1962, Carroll returned to Sing Forgettable Things flanked by three identical chorus girls. It’s an improvement on his previous effort (though both songs came in fourth place). A nice walking guitar-riff elevates this above mere slush.

It may still be popular, but that insufferable earworm of a tune is really nothing to congratulate. Still, Sir Cliff’s knee-popping dance moves deserve a smattering of applause. They certainly made an impression at the time: after one particularly impressive backward hop, his female fans could be heard shrieking with excitement.

Vikki’s under-powered power-ballad may not have been prize material, but her hair stylist certainly deserved a trophy. After Eurovision, the song sank without a trace. Vikki has since renamed herself Aeone, and relaunched her career with more success as an LA-based ambient folk singer.